Today, the monthly period has over 5000 euphemisms, according to Clue’s international survey. Whether you call it Aunt Flow, time of the month, chums, shark week, or 'alarmstufe rot' (German for code ‘red alarm’), menstruators across the globe chime in unison, that they are ‘on their period’.

Why is a period called ‘menstruation’

Origin stories for early menstruation are generally pretty spotty in terms of references, probably in part due to the lack of documentation of menstruation stories throughout history.

What is a period?

A period is your body shedding tissue (uterine lining) that it no longer needs. This happens in a few phases, known as follicular, ovulation, and luteal phases. Menstruators around the globe have studied some variant or another of the menstrual cycle. But what it all comes down to is that your body is preparing a cushioned place in your body for a baby. However, if you do not get pregnant, your body gets rid of this unneeded tissue then tries again the next month.

Today we’re aiming to cover the basic stages of the menstrual cycle, so you can understand what’s happening in your body. There’s some science involved, our bodies are quite impressive, but we’re here to make that a bit clearer. Now that we know the basics of ‘what a period is’, let’s break down what happens in the month.

How do I know when the first day of my period is? 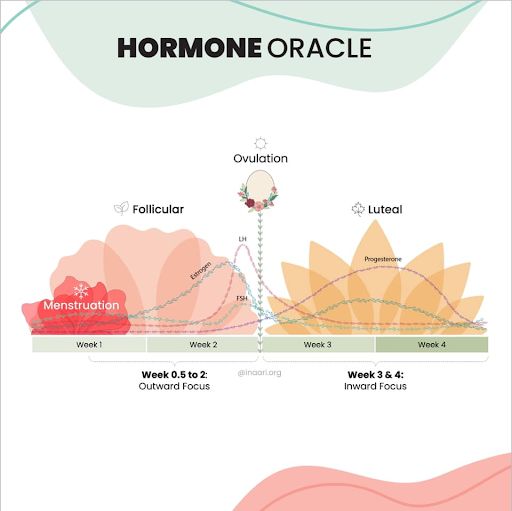 Day 1 of a menstrual cycle is the first day of your period. Interestingly over the years, I have encountered several menstruators who understood that their period marks the end of a cycle. This is often due to a vague understanding of the different phases of the cycle. Spotting and light bleeding that happens a day or so before the cycle would ideally be counted as the first day of the cycle. While always important, keeping yourself fresh and clean during your menstruation is a key aspect of mental and physical health.

When is the follicular phase of a period?

Once you start your period, you enter the follicular phase of your menstrual cycle. The effective shedding of the uterine lining results in a drop of hormones, such as estrogen and progesterone, that were lingering in your system from the previous cycle. All of these actions occurring in harmony result in the release of a hormone known as follicle stimulating hormone (FSH) from the pituitary gland. FSH tells your ovary to develop a few follicles.

Of all the follicles that start developing, only one will progress to form a mature egg for the cycle. It’s kind of a one-egg-to-rule-them-all kind of scenario. At this point, you are around day 10 of your menstrual cycle.

The developing follicles encourage the lining of the uterus to start growing. These follicles also like the first spike of estrogen along with a little testosterone during the cycle. These changes encourage the pituitary to release yet another hormone, the luteinizing hormone (LH) along with some more FSH.

These high levels of hormones LH and FSH, trigger the release of the egg from the follicle. At this point, the release of the egg signals a term you’re probably familiar with: ovulation. This occurs at around day 14 of the menstrual cycle. The released egg makes its way toward the uterus through the light contractions of the fallopian tube. The egg survives for only 24 hours after its release.

When is the luteal phase of my period?

Once your egg is released, your menstrual cycle enters into what is known as the luteal phase. If within the 24- hour window, the egg does not get fertilized, it breaks down. The follicle from which the egg was released remains on the surface of your ovary and is now termed the corpus luteum. The corpus luteum is responsible for most of the nagging changes you observe in the second half of your menstrual cycle, through hormones estrogen and progesterone.

The main goals of these two hormones are to 1. Promote the growth of the lining of the uterus, and 2. To welcome a fertilized egg when it reaches the uterus. It does so for the next 10 - 12 days of the cycle. Which is usually enough time for a fertilized egg to reach and implant into the uterus. If this does not happen, towards the end of the cycle, which is around day 20 - 24 the corpus luteum, aka the broken follicle that carried the egg this month, begins to crumble.

Your body at this point, has its levels of progesterone and estrogen slowly falling, off, prepping your body for your next period. This hormone drop results in the initiation of the shedding of the uterine lining, bringing us full circle to day 1 of your next menstrual cycle.

While exercise and health as a priority are maybe the hardest at this point, it’s important to keep up with it! Here are a few tips on working out during your period.

Why do I get period cramps?

During your period, there is a lingering cloud of irritability. You might still be on the edge and easily annoyed. With the cramping, bloating and general discomfort that periods bring, it is still a waiting game for the sunshine to show through those cloudy days. It might be a bit tougher to exercise and keep a healthy mindset during this time, be extra nice to yourself.

However, by the end of the week, around day 7, things normally start getting easier again. The rise in estrogen is linked with the release of all the feel-good hormones like serotonin and dopamine. And among menstruators, even though testosterone levels are low at this point, they are documented, along with estrogen, to play a role in increasing libido, boosting confidence, increasing pain thresholds, and a general heightening of the energy levels.

Why do I get cramps in the middle of my cycle?

This is around ovulation time which lasts for only a couple of days. Since menstruators are still lingering from the follicular “high” there might not be a lot of change in the general sense of wellbeing. However, some menstruators might observe slight cramping, or spotting during ovulation. Referred to as Mittelschmerz (German for “middle pain”), ovulation pain can be located in the lower pelvic region, often to just one side, the side likely to be releasing the egg. Only about 40% of menstruators record ovulation pain. Following ovulation menstruators might also observe a slight increase in their body temperature. The fine-tuning in the shift of hormones before and after ovulation is responsible for this. 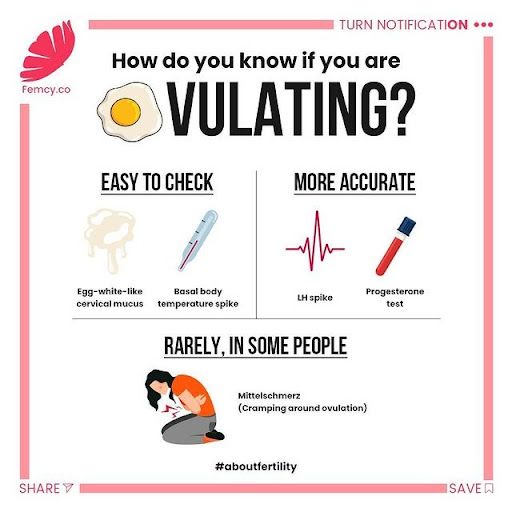 During the final couple of weeks of your cycle, there is often a whirlwind of changes. All the confidence levels slowly begin to dip. Irritability, sadness, and anxiety are at the forefront of the luteal phase. The plummeting levels of testosterone, the dip in estrogen, and the slow rise of progesterone contribute to this rollercoaster couple of weeks. During this time both estrogen and progesterone start to level off for the final marathon of the menstrual cycle. This is the premenstrual phase (PMS) and you may notice bloating, nausea, fatigue, headaches, and cramps kick in.

For people who menstruate around the globe, cycle phases and the changes they bring in our bodies can be very different. There are no two cycles that are the same, some people get bad cramps and acne, some people don’t notice any changes at all. Even your cycle might be different month-to-month, or year-to-year, many people experience cycle changes throughout their lives.

How can menstrual cycles be different?

A normal cycle length can range from 21 days to 35 days. Which indicates a difference in the length of the different phases within the cycle.

On average, the length of the luteal phase tends to be fixed, which is around  12 to 14 days. This means the length of the follicular phase can range from 10 to 20 days. Another important fact to note is that ovulation doesn’t necessarily occur at the same time during every menstrual cycle. Based on hormone surges, dips, and a conducive internal environment, ovulation occurs.

At menarche (aka your first period), you might experience heavy bleeding, along with infrequent cycles or irregular cycles. Since your menstrual cycles are just kick-starting on their course, they might be irregular, before they fine-tune for the long haul. This is pretty similar to when we stop getting our periods later in life, a time known as ‘menopause’. During the perimenopausal phase (around when menstruation is about end) periods can be infrequent, with heavy or light bleeding. Then they will eventually stop, often when we’re between 45-55. It’s like we go full circle.

Pregnancy, hormonal birth control, other forms of contraception, trauma, infection, illness, lifestyle stressors, and drastic weight change, can all contribute towards fluctuations in our menstrual cycles over the years. An imbalance in the internal hormones (not just estrogen and progesterone) also significantly contributes to fluctuations.

These fluctuations can manifest either as periods that are delayed, early, light, heavy, or skipped entirely.

When should I see a doctor about my period?

As a rule of thumb, anything that is out of the norm during your menstrual cycle requires medical attention. It’s better to be safe than sorry, but to get you started, here are a few guidelines. 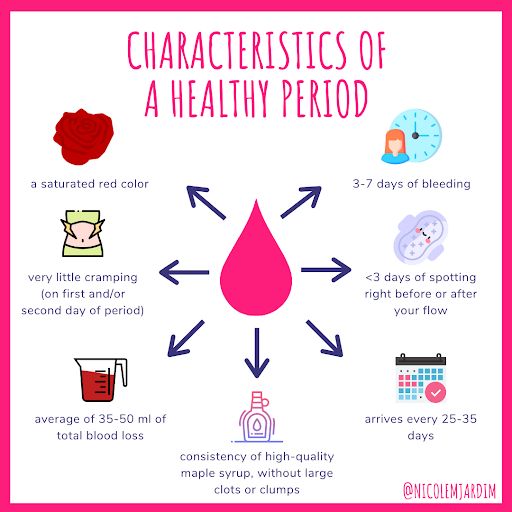 What is considered heavy bleeding during your period?

Heavy bleeding that often lasts for more than 10 days, and soaks through several pads/tampons is an indicator for something that might be amiss. Ideally periods last for 3 - 7 days, with slight reasonable fluctuations from cycle to cycle.

Intermenstrual spotting or bleeding should also be discussed with a doctor. There are a few things that can cause spotting, including underlying medical conditions that need to be ruled out quickly. Infections are also a cause of intermenstrual bleeding, discharge, and pain. To confirm any of this, a healthcare provider would essentially conduct a comprehensive examination, which can include asking you questions and doing a physical exam. This is nothing to be worried about. We even have an article on how to feel confident speaking with your gyno to help you feel prepared.

Manageable mood fluctuations, like moodiness and irritability, or rapid jumps into sad-town, are an often-expected part of a menstrual cycle. Mood changes that severely affect your day-to-day should be discussed with a healthcare professional to make sure everything’s in order.

For people who menstruate, their menstrual cycle is similar to a vital sign. Tracking your period, meaning to take note of your symptoms and when your period begins (day one) and ends is not only meant to navigate through the ins and outs of fertility but is keeping an eye on your basic well-being.

Dr. Michelle Frank is a collaborator with YourPeriodCalled, alongside many other great initiatives around female health.