Talking about periods with male friends and co-workers doesn't have to feel like unleashing landmines.

Menstruation has long been a taboo topic of conversation. This is slowly changing, but there is still a stigma attached to casually talking about it, especially when we cross gender lines.

The menstruation silence across gender starts early. In North America, many schools choose to separate genders in sex education lessons (quick note, sex education varies widely across states and counties, so we’re talking big strokes here!) and boys often seem to skip the lessons about menstruation (doesn’t really seem a fair trade-off). This lack of conversation is carried on throughout our lives. A global survey from 2016 showed that of the 90,000 women interviewed, most of them weren’t comfortable talking about periods with men (Vanvuren, 2018). Think about it, how many times have you been on your period or experiencing cramps, been asked what’s wrong by a male friend or coworker, and have just brushed it off as a headache? I know I have. So men are excluded from the period conversation from childhood through to adulthood.

Why should we talk about periods?

While menstruation is still taboo, talking about it will help reduce the stigma. And even if you never want to discuss it, at the very least wouldn’t it be nice not to have to hide your menstrual product when you go to the bathroom?

Also, it’s ridiculous to think how little some men know about menstruation. When Sally Ride went into space (the first American woman to do so) scientists in NASA asked her if 100 tampons would be enough for a week. That’s right. 100! Let’s make menstruation a part of men’s regular lives too.

How to talk about your period with male friends

How to talk about your period in the workplace

Periods have often been used as an excuse to keep women out of school and work (Hilmantel, 2016). In 1873 one doctor said girls needed to take themselves out of school when on their period (Hilmantel, 2016), and in WWII, women air service pilots (WASPs) weren’t allowed to fly when menstruating in case they fainted (good news, they largely ignored this rule! (Hilmantel, 2016).  Even if we shouldn’t be banned from working when menstruating, periods do impact our working experience. More than half of menstruators experience pain for one or two days every month, and 20% report it as bad enough to impede daily activities (Goldberg, 2016).

We know that talking about periods at work is tricky; in one survey, 32% of men said they thought it was ‘unprofessional’ of women to talk about periods at work (Thomson, 2019). And anecdotally, men have reacted badly to menstruation being brought up in the workplace. In a truly depressing read, one man reported a woman to HR for mentioning her period (Hills, 2017) (check it out here).

So yes, it is more challenging to talk about menstruation at work. But you can do it! Here are some easy, practical steps (and remember, we’re talking about work, but this can be applied to university or school situations as well).

If you had to take a day off for cramps and someone asks why, tell them the truth! No need to shy away from the truth. Say you had cramps. Be upfront and plain in your language. Something as simple as ‘I had cramps’ or ‘I had PMS’ will do, and then move on.

If you go to the bathroom, instead of picking up your entire bag, or rummaging around in it and then furtively hiding your menstrual product in your hand, just find it and calmly take it with you to the bathroom. No need to hide it.

You could also suggest to your office manager how inclusive stocking tampons and pads openly in the bathroom would be. Not just the women’s, but the shared and gender-neutral ones too! Let’s make this an everyday thing, out in the open, get men used to seeing menstrual products, and normalize the fact that we menstruate! 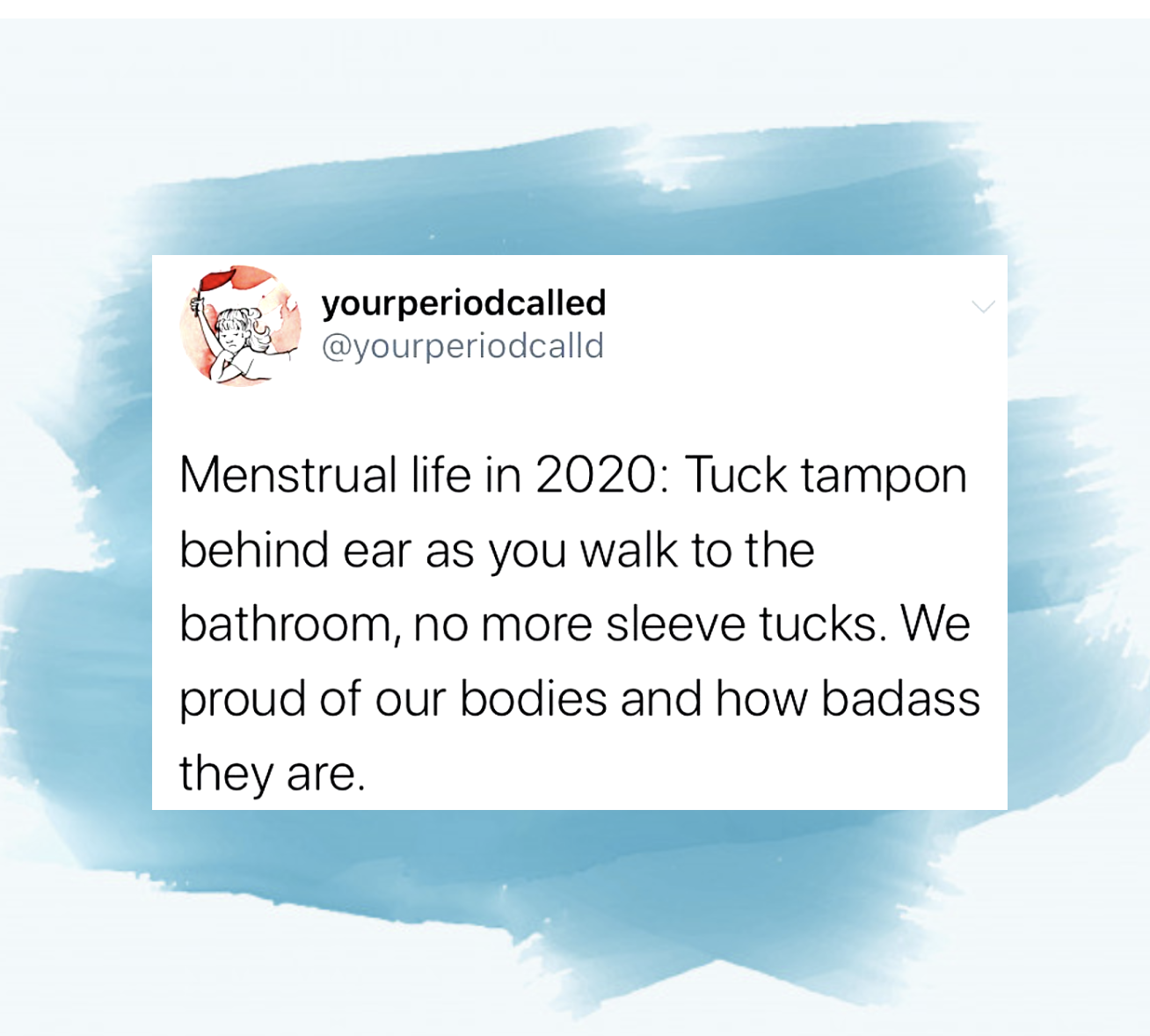 Vanvuren, C. (2018, April 07). Why We Need to Teach Men About Menstruation. Retrieved August 20, 2020, from https://www.bloodandmilk.com/why-we-need-to-teach-men-about-menstruation/

What was Used Before Tampons and Pads?

The Period Scene in Schitt’s Creek

Could we love David Rose more? Yes, we can because how he supported Mandy through…