My family was driving through Cooperstown, New York, as my baseball-crazed older brother wanted to stop at the Baseball Hall of Fame.

I was in a public bathroom when I found that my underwear was stained dark brown. I was convinced that I had … let’s just say, had a bit of an accident.

My mother kept congratulating me for my newfound womanhood. It made me angrier every time she said it.

I called my mother to come into the stall, and she immediately congratulated me for ‘becoming a woman’. I was very confused.

She then informed me that I had gotten my period. I was devastated and there were definitely tears. I wasn’t ready and I refused to look down. I begged my mother to put a pad on for me, because facing the reality of what was happening to my body was too much.

My mother kept congratulating me for my newfound womanhood. It made me angrier every time she said it. How on earth was bleeding from my vagina a mark of womanhood? To me it was literally the worst thing that could be happening.

It is important to note that I now understand that having your period is not a mark of womanhood. Not all menstruators are women, and not all women menstruate.

I remember sitting in the room at the bed and breakfast we were staying at. My dad came in with the Midol my mom had sent him out to buy. My brother, 16 at the time, looked very confused about what was happening.

The idea of having my period was terrifying. I was convinced that I was way too young and would be the only one at school that coming year who would have it. In my head this meant that everyone would look at me like I had some contagious period disease.

Still very upset as to what was happening to my body, my mother insisted that we find a book store so she could buy me the book “Are You There God? It’s Me, Margaret” by Judy Bloom. Which of course, with the power of a determined mother, we bought the next day.  I read through the book quickly, which portrayed getting your period as something that each young girl was anxiously waiting to get. I was shocked, confused but also a little relieved.

By the end of the trip I had come to terms with the fact that I was now a menstruator. That September I found out many of my classmates had also gotten their period that summer. Confirming that I did not have contagious period disease.

Ironically, I am now extremely passionate about menstrual equity and normalizing menstruation. And for someone who was devastated at getting her period, it’s now one of my favourite things to talk about. 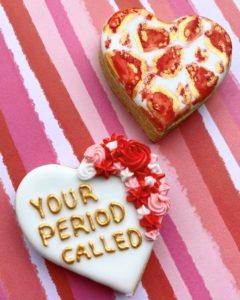 What was Used Before Tampons and Pads?

The Period Scene in Schitt’s Creek

Could we love David Rose more? Yes, we can because how he supported Mandy through…

Periods and TV: From Disney to Mean Girls to Big Mouth!